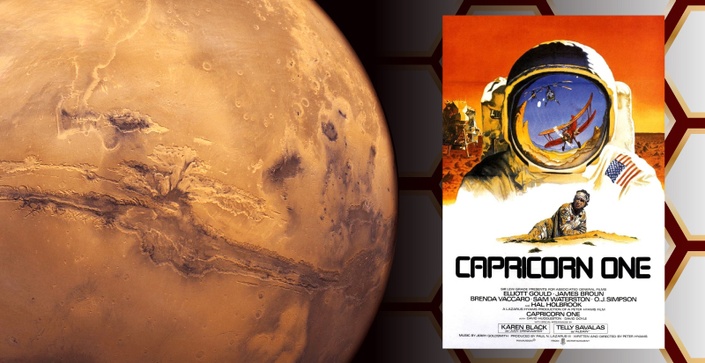 A Funny Thing Happened on the Way to Mars

Capricorn One—the first crewed mission to Mars—is on the launch pad. The bewildered crew of Brubaker, Willis, and Walker are removed from Capricorn One and flown to an abandoned desert base. The launch proceeds on schedule, and the public is unaware that the spacecraft is empty. At the base, the astronauts are informed by NASA official Kelloway that a faulty life-support system would have killed the astronauts during the flight, and they must help counterfeit the television footage during the flight to and from Mars. Initially, they refuse, but Kelloway threatens their families to get them to cooperate.

Capricorn One is a 1978 thriller film that narrates a government hoax created to deceive the public on a supposed Mars landing. It was written and directed by Peter Hyams and produced by Lew Grade 's ITC Entertainment. It stars Elliott Gould with James Brolin, Sam Waterston and O.J. Simpson as the astronauts.

Capricorn One
Available in days
days after you enroll